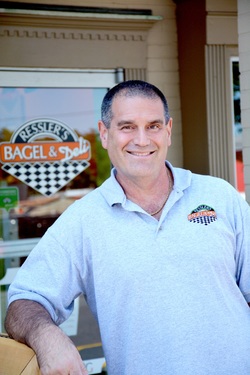 The history of Ressler's Bagel began in 1990 when Joe and
Lori were married. In 1992, Joe lost his job and had a difficult time finding work in his field. So, Joe and Lori decided it might be time to start their own  business. The bagel business was chosen and the journey began!

Joe's dad knew a man who owned two bagel shops in the Clifton, NJ area (about 8 miles from Manhattan) where Joe grew up. So Joe's dad asked this man if he would teach Joe the bagel business. This may not seem like a big deal, but bagel recipes are a closely held secret. In you have a good recipe, you didn't share it for fear that someone would open up a shop in your area. But, this man agreed to teach Joe because he promised not to open up a shop in his territory. Fortunately, Lori had a full-time job so this allowed Joe to learn the bagel-making business.

Joe worked without pay during his apprenticeship. After a year, it was time for Joe to move on to a different shop. The two shops he worked in were not deli's. They sold bagels only, so he could still learn to make the doughs and bake the bagels, but he wanted to see the inner workings of a shop that was both bagels-to-go and a deli. After three years of perfecting his craft, it was time to find his own
location.

Bagels shops were everywhere at this time, so after looking throughout the state of New Jersey a friend of Lori's suggested they take a look at Central Pennsylvania. Since there were no New York Style bagel shops in the area, the choice was wide open. The decision was made to open a store in the Windsor Park Shopping Center in Mechanicsburg. The lease was signed in December 1993 and by June of 1994 Ressler's Bagel & Deli opened its doors to the public.

* photo from Harrisburg Magazine
Powered by